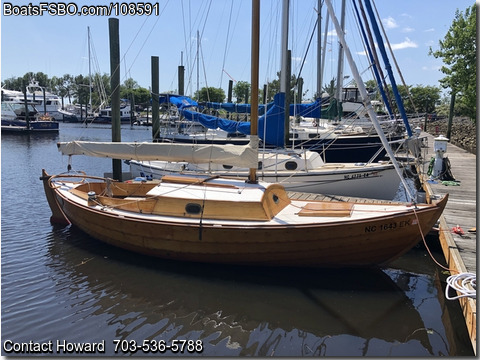 Sigi is a 20 foot shoal draft, double ender. She was built in 1981 in Sutton Bay, MI by Chip Stulen. Chip learned his trade in Norway and has been featured in several periodicals. Sigi was referred to as the prettiest boat in the basin at the 1984 Newport, RI Wooden Boat Show. Sigi was sailed for just two seasons on Lake Michigan before being stored in a barn for the next 27 years. I took possession in 2010. That winter I replaced the old Kenmare gas inboard with a QT5 from electricyacht. com. Her four AGM 12v batteries are located in two athwart ship cabinets and there is an onboard charger in the aft compartment. Sigis rig is a sliding gunter and she has a roller furling jib plus lazy jacks. All of her hardware is bronze with the exception of the sail track. She has a manual whale gusher also installed in the aft compartment as well as a whale 650 electric pump in the shallow bilge (used primarily when the boat is taking up each Spring). Sigi is still a pretty tight little ship. Sigi has a v-berth but does not have a head. I sailed Sigi out of Herrington Harbour South Marina on Chesapeake Bay before towing her to Wilmington, NC in 2018. The pictures were taken in AprilMay 2020 with the exception of the photos of her under bare pole and on her trailer. The trailer is original. Ive included a photo of a repair made to her port, forward sheer strake… CONTINUE READING HERE
←previous next →